IDC GOES TO A BRIEFING WITH BSP’s GOVERNOR DIOKNO 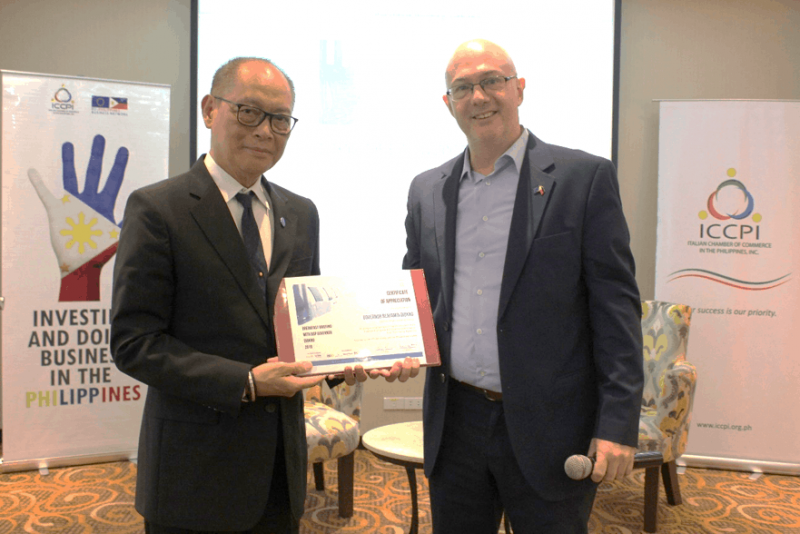 MANILA – Held on May 17 at the Dusit Thani Manila, Makati City, a breakfast briefing has been organized by the Italian Chamber of Commerce in the Philippines Inc. (ICCPI) to discuss about the monetary policies and overall strategies of the Bangko Sentral ng Pilipinas among esteemed ICCPI members, stakeholders and BSP Governor Diokno. During the briefing Gov. Diokno shared with the notable attendees an interesting presentation on the overview of the latest developments in the monetary sector, followed by a description of the monetary measures that have been pursued by the BSP, describing also the BSP’s policy thrusts moving forward, Gov. Diokno ended his presentation assuring that the BSP is strongly committed to take all necessary policy actions to safeguard the government’s inflation targets and deliver on its primary mandate of price stability to support the country’s growth trajectory.

Arch. Romolo Valentino Nati, Chairman and CEO of IDCTM – Italpinas Development Corporation was among the attendees at the briefing, together with other experts and policymakers, such as Mr. Teddy Reyes, Executive Director of Philippines Institute of Petroleum and Italian Embassy’s Secretary, Mr. Eugeniu Rotaru.

It is a publicly listed real estate developer company that specializes in the design and development of sustainable properties in emerging cities in the Philippines. The Company’s aesthetic and design philosophy operate in tandem with a commitment to environmental conservation. The result of the Company’s design innovations is not only to improve the impact of development upon the environment, but also to lessen the dependence of end users on energy and water.

Arch. Nati remarkable talent has led IDC’s projects to win numerous awards among which three International Property Awards, for Best Mixed-use Developments in the Asia-Pacific Region, and to receive the EDGE certification (Excellence in Design for Greater Efficiencies) by the IFC World Bank, to name a few.