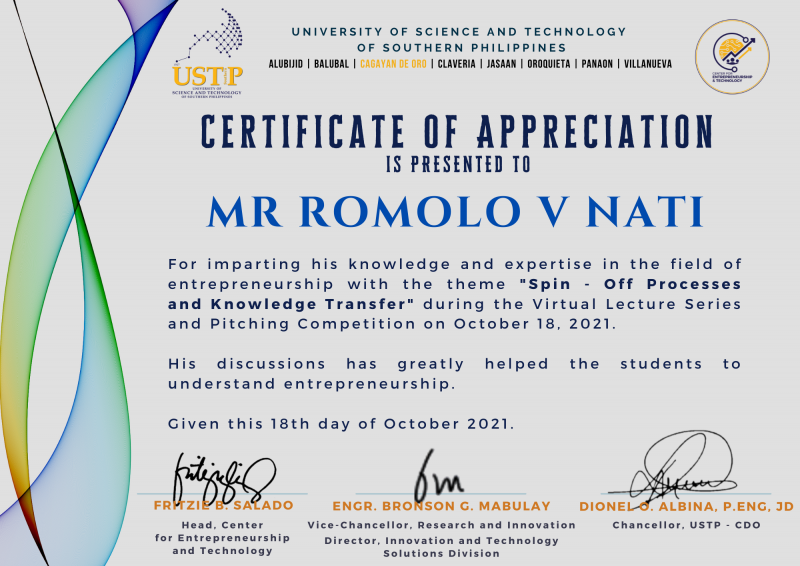 There are two of the value propositions behind the company’s success to survive amidst the big competition. These are; first is we specialize in green design projects, something that is new to the market; and second is we focus our projects in emerging cities, where there is a great demand for real estate products,” said Architect Romolo Nati during his lecture at the University of Science and Technology of Southern Philippines last October 18, 2021

Italpinas Development Corporation is a publicly listed Italian-Filipino company that specializes in eco-friendly mixed-use projects in Northern Mindanao, such as its flagship development, Primavera Residences, followed by Primavera City, both awarded by The International Property Awards-Asia Pacific as Best Mixed-use Developments.

Cagayan de Oro, known as the City of Golden Friendship, the capital city of the province of Misamis Oriental and part of the growing Metropolitan Cagayan de Oro, is the site where Arch. Romolo Nati and his business partner, Atty. Jose D. Leviste, developed the flagship project of Italpinas Development Corporation, a two-tower green building completed in 2014, named Primavera Residences.

The second and ongoing development of the company, Primavera City, is also in uptown CDO. Primavera City development is composed of mid-rise towers and a high-rise tower and will be developed in 4 phases the first of which, Città Verde is already currently under construction. Newly launched Città Bella, which is phase 2 of the Primavera City project. This will be followed by Città Grande and its tallest tower, Città Alta.

Arch. Nati is spending more time sharing his advocacy and experience attending events, exhibitions, and speaking engagements and has been invited to numerous events and conferences as a speaker and panelist.

He has also been featured in National Geographic Magazine ASIA as “One of the Philippines’ new business leaders “and, in Bloomberg Philippines, as a “Thought Leader”.