PSC-listed and design-driven company Italpinas Development Corporation (IDC) underscored the significance of the infusion of its green advocacy in its property development projects in emerging locations in the country, softening the challenges posed by being a young player in the industry.

IDC started its first project in the city of Cagayan de Oro, carving out a niche as the first developer and green builder in the region and in Mindanao. In just a short span of time, the company went on to expand in Luzon with the Miramonti towers in Sto. Tomas, Batangas, and Visayas with projects in the pipeline. The new developments came at the heels of the success of Primavera Residences in CDO, which was able to gather multiple awards from various organizations.

IDC was incorporated to be the frontier in designing passive green projects with the intention of concentrating its developments in emerging and alternative locations outside Metro Manila. However, it was not easy for the company to execute this green advocacy. 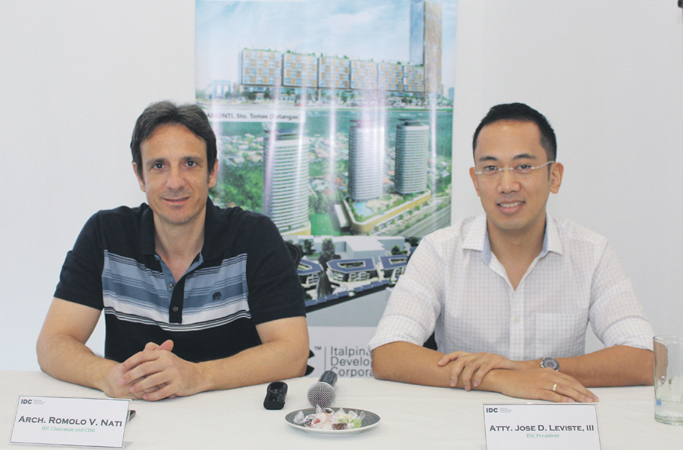 “Being young in the business in a country of many well-established developers was a great challenge at first. When we decided to build in Cagayan de Oro back in 2009, people thought we were crazy. They thought that it would be impossible for us to make the project a success considering that CDO is a small city. But we wanted to prove them they were wrong about it, “ said Atty. Jojo Leviste, president of IDC.

Despite the onset challenge, IDC’s commitment to its ambition continues to deliver its green projects in growing cities. As a matter of fact, it became the company’s biggest advantage making it the first mover in sustainable property development in these locations.

“We were ahead of the competition. And it is good to see now that more developers and big developments are being put up and invested in Cagayan de Oro. It is a fulfillment for IDC to see that happening in the city,” explained Architect Romolo Valentino Nati, chairman and CEO of IDC.

Talking about the essence of fostering projects in emerging cities, Atty Leviste pointed out, “We think that the Philippines is transforming from unipolar into multipolar, where several centers around the Philippines contribute to the development and growth of the country.”

“With this, we anticipate a ‘centrifugal migration’ in which the population moves away from Manila to different regions. We believe that the Philippines is changing and developing fast, and we are embracing this dynamic shift,” he added.

Apart from those encounters, IDC’s challenges in the business continue to help them grow and move forward. IDC has been striving to serve its clients and has been partnering with organizations to achieve their common goals for the industry and community.

“Right now, IDC has never been this optimistic to continue upholding its advocacy and ambitions for the environment and for emerging cities in the Philippines despite facing challenges,” Architect Nati said.